It is pretty well known that Google is now Alphabet – a re-imagined company that is comprised of a variety of businesses around the focus of organizing the world’s information to make it universally accessible and useful. Building a new brand on top of Google was an uncomfortable decision, but there is much to be learned from it. 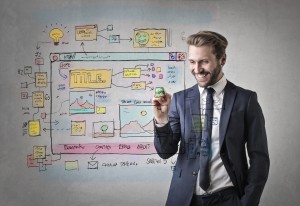 The company really did not change its structure, but the company did restate its structure differently and explained it. The uncomfortable re-imagination worked on Wall Street – as the company overtook Apple as the worlds most valuable company (albeit temporarily as today Google is worth $598.73 billion and Apple is worth $651.5 billion – what’s a $50B swing one way or another?)

Brokerage – Pacific Union: Dissatisfied with listing presentation software, they built the Pacific Union DLP – Digital Listing Presentation. It is not only mobile enabled and beautiful, it is elegant and clearly born from the culture of a great brand. It was time consuming to develop. It cost five-times as much as anything they could have licensed. It could have been a disaster. It was an uncomfortable risk. It resulted contributing to one of the most remarkable growth spurts of any brokerage operating at enterprise scale – adding 20%+ growth year after year and becoming the 9th largest brokerage firm in America in the face of very strong competition.

MLS – MRIS: For years, MRIS was atop the leaderboard as the largest MLS in the nation. They are among the only MLSs in the nation that do quarterly benchmarking for every department measured against user satisfaction. They measure their satisfaction goal on every calendar for departmental excellence. Internally, they hit on all cylinders. To become uncomfortable, they are working with TREND MLS to make the service offering even bigger, even better. This is not their first effort either. They also manage many of the nation’s largest MLS data sharing cooperatives. They always innovate beyond their core.

Technology – LoneWolf: Long known as a leader in accounting software for brokers and franchises. They could have stuck with that. But to become uncomfortable LoneWolf made acquisitions to emerge as a multi-disciplined software developer with nearly every application that a brokerage could purchase. They are as close to a total brokerage-in-a-box solution as you can find. We have not seen the next break out product for LoneWolf, but you get the sense that blending so many areas of expertise into one company is a cocktail for success.

Google is known for search, even though they are market leaders in so many other areas. By changing their name from Google to Alphabet, they reshaped the way that the world views them. Alphabet is sitting on $73 Billion in cash. No matter how much investment focus they apply to growing their core, there is very little they can improve their core category and expand. Most of Alphabet’s Google products have well over a 1,000,000,000 users and continue to grow at a pace of 18% or more a year. They need more humans on the Internet to keep growing. How about that problem? Google is like the air that the Internet breathes. As an aside, what happened to Microsoft, Sun Microsystems, and so many others? They languished.

Many analysts consider the crazy things Alphabet pursues as marketing. Does it really matter that Google Glass was a flop? The marketing value along was worth more than three-times their investment. Rumors and outrageous endeavors are terrific ways to grab headlines. Even Google+ keeps hanging in there. Google Hangouts are still cool. Android runs on 8 out of 10 mobile devices in the world, including watches, for free. Google continues to be a pioneering company that can tinker without concern.

As real estate launches into the spring of the year, embrace the spirit of renewal and think about doing some things that make you uncomfortable. Be asymmetrical. Create unholy alliances. If everyone is going in one direction, send a group of people off in the opposite direction. As Seth Godin says, “Playing safe is very risky.”

Many real estate businesses need help getting out of their box. Contact WAV Group if you need help finding a direction for your future growth.